Today we had a huge spring clean of our garage, there was so much stuff in there it really needed a declutter 🙂 we managed to fit in a food shop too, so a productive day. I got some closed up daffodils at the shops and we can enjoy watching them gradually open over the next few days, I love how they make rooms seem sunnier. If you’re eyeing up the rotary cutter I don’t blame you, I fell in love with it, it has beautiful tulips on it, a limited design from olfa. The rainbow is a large grims rainbow, bought for the boys but actually… It’s mine, shhh!

So on tonight’s menu for tea after a huge food shop was something so scrummy I could’ve eaten it ten times over. My friend gave me for my birthday a folder of her favourite recipes, it didn’t say who it was by or I would credit them, so instead ill credit my amazing friend for giving me an awesome birthday present! 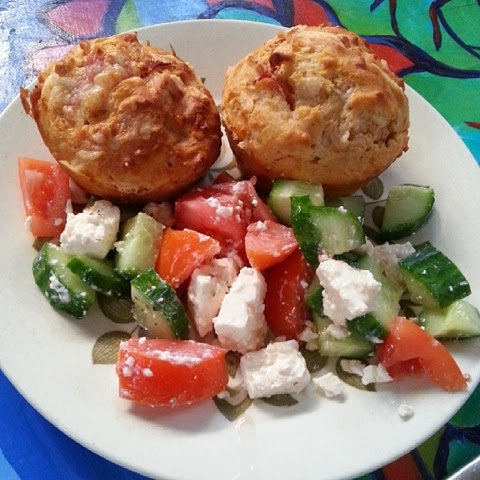 So pizza muffins! And amazing Greek salad, that will never be the same as the one I ate in Crete once apon a time.
Preheat oven to 180*C
1 cup of self raising flour
1tsp of baking powder
1 cup of grated cheddar
Mix this all up in a bowl. Then add fillings (I’m a veggie and just had them plain) recipe suggests ham and pineapple. Give it another quick mix.
1/3 cup of oil
2 eggs
1 cup milk
2 tbsp of sundried tomato paste (normal paste will do but I think this gives more flavour)
Whisk this in a separate bowl,
Combine til it’s just mixed, don’t over beat it. Pop into an oiled muffin tray, should make about 12 and sprinkle some grated cheddar on top. Pop in the oven for 30mins or until brown on top and skewer comes out clean.
Simple! Now for the super easy Greek salad.
Beef tomato
Half cucumber
Half block of feta
2tbsp of olive oil
Oregano
Chop, mix, serve!
It was delicious!
Peace and happy spring! X
Advertisement